WHO IS THE HOLY SPIRIT

The Divine Principle explains that ALL THE SPIRITS that support Jesus, played the role of the Holy spirit (Read Resurrection). And that's how as a Christian I have experienced it. These saints can be male of female, does not matter, but they are standing in POSITION OF JESUS' BRIDE. Since he had no substantial Wife, like True Mother. Holly Spirit is just symbolically representation of True Mother of Humanity. She substantially restores Eve's position and she substantially fulfills the mission of giving rebirth to humanity. 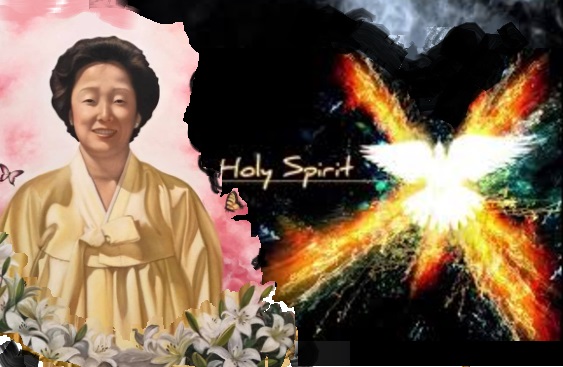 HOW SPIRITS ACTED ON BEHALF OF THE HOLY SPIRIT

"How do spirits help people on earth fulfill the Will of God? When people become receptive to spirits through prayer or other spiritual activities, the spirits descend to them to form a common base with their spirit selves and work with them. Spirits perform various works. For example, they pour spiritual fire on earthly people and give them the power to heal diseases. They help people enter states of trance and perceive the realities of the spirit world. They give people revelations and the gift of prophecy. They can also give deep inspiration to the soul. In these various works, spirits act on behalf of the Holy Spirit, guiding people on the earth to accomplish the Will of God." DP

TRUE MOTHER's MISSION TO GIVE REBIRTH

"The one who has come as the True Mother to give rebirth to fallen people is the Holy Spirit." DP 147

DP: "Jesus and the Holy Spirit and Their Mission to Give Rebirth" represent Father and Mother giving rebirth substantially to humanity.

"As will be explained, Jesus and the Holy Spirit are the True Parents who came to give rebirth to humanity in place of Adam and Eve." DP 90

"a father alone cannot give birth to children. There must be a True Mother, as well as a True Father, for fallen children to be reborn as good children. The Holy Spirit came as the True Mother. This is why Jesus told Nicodemus that no one can enter the Kingdom of God unless he is born anew through the Holy Spirit." DP 146

"Being feminine, the Holy Spirit consoles and moves the hearts of people. She cleanses people’s sin, thereby atoning for the sin which Eve committed. Jesus, the masculine Lord (TF), works in heaven (yang), while the Holy Spirit, his feminine counterpart (TM), works on the earth (yin)." DP 146

"Encouraged by the ardent hope of the Second Advent, they were filled with the Holy Spirit and established the early Christian Church, even amidst great adversity." DP 113

AFTER FATHER'S ASCENSION MOTHER WILL LEAD

"The pillar of cloud which led the Israelites by day (yang) symbolized Jesus (TF), who would one day lead the people of Israel in the worldwide course to restore Canaan. The pillar of fire by night (yin) symbolized the Holy Spirit (TM), who would guide them as the feminine Spirit." DP 200

"After Jesus’ (TF's) ascension, the resurrected Jesus (TF in the sp.w.) and the Holy Spirit (TM on Earth) guided Christians directly. Hence, God did not raise up any one person as the central figure responsible for His entire providence, as He had earlier." DP 255

Therefore Hyung Jin's coronations are not to put him as a central figure, but as Father explained, to restore the failures of the central figures of the 3 Ages of Restoration; The failure of Solomon, who defiled the Temple (TP), The failure of the descendants of Charlemagne, who divided Christianity, and the failures of leaders who got high respect but made themselves a new center, deviating from Father. That's why Father was very specific, True Mother is the Center, there should be no confusion about that.

"The Father, Son and Holy Spirit refer to Adam and Eve with God at their center." CSG p.433

"A person who has perfected his individual character becomes a temple of God, and the Holy Spirit abides within him. Living in oneness with God, he acquires a divine nature. Thus, it is impossible for him to commit sin or to fall." DP 80

"To fulfill the purpose of creation, Jesus (TF) and the Holy Spirit (TM) stand before God as object partners who separately manifest the dual characteristics of God. They unite through give and take with each other with God as the center and form the four position foundation. God, Jesus (TF) and the Holy Spirit (TM) thus become one, and this oneness constitutes the Trinity." DP 147

"God spiritually (substantially) restored the three blessings in the providence of spiritual (physical) salvation through the joint efforts of the resurrected Jesus (TF) as the second Adam, the Holy Spirit (TM) representing Eve." DP 297

WE CANNOT UNDERSTAND THE WORD WITHOUT MOTHER

"unless one first receives the Holy Spirit (TM), joins in mystical union with Jesus (TF) and experiences Christ’s inner light, he cannot understand the true meaning of the Bible." DP 284

"Since Jesus is the spiritual father and the Holy Spirit is the spiritual mother, fallen humankind cannot pass to the Kingdom of Heaven without going through the relationship of parents." CSG p.1037

"One who has been reborn through the Holy Spirit (TM) surely has experienced resurrection.. such a faithful person.. has been resurrected to the level of being reborn into God’s realm, while the other is a spiritually dead person destined for hell. DP 120

"Christ must return in the flesh and find his Bride. They will form on the earth a perfect trinity with God and become True Parents both spiritually and physically. They will give fallen people rebirth both spiritually and physically, removing their original sin and enabling them to build trinities on earth with God as the center. When fallen people are restored to the point where they can establish true four position foundations centered on God, they will finally be able to build the Kingdom of Heaven on earth where God’s three great blessings are fulfilled." DP 158

FATHER AND MOTHER'S LOVE & WORD IS ONE

"The love of Jesus, the groom, and the love of the Holy Spirit, the bride, must unite into one." CSG p.1270

"the words that Jesus left unspoken will not remain forever a secret, but one day will be divulged through the Holy Spirit as a new expression of truth." DP 98

"The most holy place and the holy place.. fulfilled as spiritual realities through Jesus and the Holy Spirit. The ideal of the mercy seat has been realized through the works of salvation given by Jesus (TF) and the Holy Spirit (TM), enabling God to appear in their works and impart His Word. On the mercy seat, where God’s Word is proclaimed, the cherubim that had blocked our path since the Fall were parted, opening our way to.. the Tree of Life." DP 228

WE ALL HAVE TO BECOME TRUE FAMILIES

"this sign foreshadowed that Jesus (TF) and the Holy Spirit (TM) would come and resurrect fallen humanity, deprived of life, to become the living children of God." DP 197

"influenced by the teachings of Jesus and the Holy Spirit, who are the True Parents of humankind, the way has been opened for all people to become godly children. " DP 93

"The Holy Spirit in Christianity is feminine. It had the responsibility to give birth to two worlds spiritually and substantially, and then to raise them up. In the same way, the Unification Church’s blessed wives must be responsible for two worlds. They must create citizens of God’s Kingdom who become able to denounce the satanic world and govern its people." CSG p.2261

"after the Second Coming of Christ, the people of faith on earth and in heaven are to bear the third responsibility to defeat Satan, the fallen archangel, and complete the providence of restoration." DP 158