Father: "I have an issue with my son marrying me off"

I have an issue with my son

Marrying me off
“My son marrying me off — I have an issue with that!” - Father told spiritually to Dr. Wilson

So many of Father’s words in the final decade of his life testify to True Mother and her victorious course. "I was at East Garden on several occasions where he said that True Mother was his equal," wrote David. In Cheon Seong Gyeong, Father states that the final step in creating the proper foundation for heaven on earth is for his lineal children to unite with their mother. And truly, in his last public speech, just before his passing, Father told us, that Mother is the victorious model we should follow in building God's Ideal. 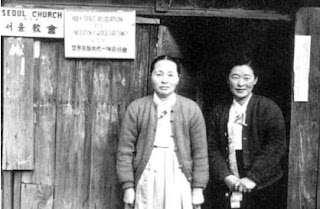 By A. Wilson
“My son marrying me off — I have an issue with that!” To which I thought, “That’s for sure!”
Many have heard about the goings on in the breakaway Sanctuary Church, where on September 23, their leader, Hyung-jin, decreed True Mother divorced from True Father and then proceeded to “marry” True Father to Mrs. Hyun-shil Kang.
Mrs. Kang, who in December last year joined Sanctuary Church, has the distinction of being the first disciple Rev. Moon made in Busan after he finished writing Wolli Wonbon.Further, True Parents had blessed her to St. Augustine in 1998.
Now, the youngest son, who claims authority from his deceased father and has a quarrel with his mother, divorces his parents from one another. Then he weds his deceased father to a follower who is submissive to his will. His motive is to establish his claim to be his parents’ sole heir, and get his mother out of the way. That the parents whom this son are divorcing are the True Parents, who in the past stated publicly he was to succeed them as leader of the church, is the theological overlay providing Sanctuary supporters with a justification for this deed. Yet it only makes this human farce more unsettling.
Like all members of FF, I can testify that Mrs. Moon remains devoted to her husband and never ceases striving to fulfill the goals that God asked him to achieve during his lifetime. I have ample reason to believe that the True Parents of Heaven, Earth and Humankind are eternally one, love each other deeply, and that God fully participates in their love.
Furthermore, it is the bedrock of FF theology that the eternal oneness of True Parents is the core and foundation for God’s Kingdom to be established throughout heaven and earth, and without that oneness there is no Kingdom. Also, the eternal oneness of True Parents is the basis of the Blessing that has defined our lives and affords all of us the hope that we as Blessed Couples can become eternal citizens of God’s Kingdom.
Accordingly, I do not believe God endorses what the youngest son has done. From what I see, the ceremony he performed to join Father and Mrs. Kang has no validity whatsoever in heaven. It does not touch True Father, whose loving oneness with True Mother is rock-solid. It does not change who True Parents are and ever will be. It is nothing more than a fantasy play by a child indulging in wish fulfillment. Members of Sanctuary Church, including Mrs. Kang, who went along with this fantasy are merely indulging that child.
There are more serious issues.. as what happens to St. Augustine.. In life he was a devoted Christian of the highest caliber, who laid the cornerstone of Christian theology. When he learned of the advent of True Parents, he received them with joy. We can read, for example, his pledge of loyalty to Rev. Moon in A Cloud of Witnesses: The Saints’ Testimonies to the True Parents (2002).
After True Parents blessed St. Augustine to Mrs. Kang in 1998, he channeled through Young Soon Kim in St. Augustine’s Confessions from the Spiritual World (2000) a series of correspondences with her:
“Although I have many shortcomings, let us honor our True Parents’ wishes and work hard together in a cooperation of the spiritual and physical worlds in order to restore Catholicism and Protestantism… I truthfully love, believe in, and follow God and True Parents and am willing to give my life to carry out all their orders.. It is indescribably painful that I have not been able to serve the Parents of Heaven and Earth on earth. But the Parents of Heaven and Earth have given me the grace of the Blessing, which is more precious than my life, and how can I be able to express my gratitude in words!”
He also spoke about his gratitude for being blessed to such a precious person as Mrs. Kang:
“I have heard about the value of the Blessing through the Unification Principle, and firmly believe that it is truly a marvelous grace and that the greatest tragedy of humanity is the loss of the Blessing. In this sense, I am sincerely grateful that through the Blessing I have received you, Lady Kang, who worked hard and accumulated great merits in your life on earth.”
Quite often True Father asked Mrs. Kang to give her testimony about what it is like to be married to St. Augustine. She shared much about their relationship to him privately. She said:
“Father is asking me to reveal all the secrets. You know we have to go through the 3-day ceremony and the 40-day period. During the 3-day ceremony, I could vividly feel he was with me and that Father was not lying.. how real it is for us to have relationship with a spirit person.”
Again, in a speech in January 2005, True Father called on Mrs. Kang and said, “Please talk about Augustine!” She replied, “How can I explain? It is hot love. From morning to night I am discussing with him. I can talk to him all the time. We have a hot love relationship.”

Early members Hyun-shil Kang (right) and Sae-hyeon Ok in front of the first Seoul Church, informally known as the House of Three Gates, in 1954.
I understand that Hyung-jin ceremonially withdrew St. Augustine from his marriage to Mrs. Kang and then blessed him to another sister. Yet.. if he is a devout believer who values the Blessing above anything else, they will have some serious fence-mending to do.
I believe True Father has an issue with Sanctuary Church’s lack of respect for the Blessing and the value of marriage. When members join the Sanctuary Church their previous Blessing is not recognized.. their families into the hell.. if the other spouse refuses to follow the Sanctuary Church path. In other words, faith is more valuable than marriage. This was the case for marriages in the fallen world, but it contradicts the value of the Blessing established by True Parents.
True Parent’s Blessing is on a higher level than faith. Hence, it is available to people of all faiths; Christians, Muslims, Buddhists, Jews, even people of conscience can receive True Parents’ Blessing and enter this realm. The Blessing as doorway to the eternal presence of God in the family is the very core of salvation. Blessed families are God’s eternal treasures; they are the citizens of God’s eternal kingdom. Heavenly Parent is pained to see these children whom He has blessed torn apart over.. power struggle of little consequence in the eternal scheme of things.
The read-out of a list of True Mother’s purported crimes to justify the divorce reminds me of the Jewish practice of the get, a bill of divorce, which Jesus condemned in Matthew 19 when he said, “What God has joined together, let no man pull asunder.” In Matthew 19, Jesus allowed only one valid ground for divorce: unchastity. Yet, True Mother was never unfaithful or unchaste.
Should anyone.. teach that it is legitimate for a husband to divorce his wife if she gets angry with him? Or if she disagrees with him on matters of money, or the inheritance for their children?  Sanctuary Church’s acceptance and even celebration of this particular divorce makes a mockery of TPs’ effort to establish the value of fidelity in marriage as a bedrock value of human society.
But on a larger level, it is a setback to his mission to unite Christianity. True Father came to this earth with the mission to unite Christianity, and by dint of his faith and suffering through unbearable indemnity conditions, he succeeded on a foundational level. He won the support of the great champions of the Christian faith like St. Paul, St. Augustine, St. Thomas Aquinas, and Martin Luther.
Was it easy for these leading Christians to pledge allegiance to True Father and testify to him in A Cloud of Witnesses? Just as millions of Christians on earth continue to reject the Divine Principle and disbelieve that Rev. Moon is the Lord of the Second Advent, there must be millions of middling and lower-level Christians in the spirit world who think likewise. They are skeptical and even horrified that someone of the stature of St. Augustine became a Moonie, a heretic in their eyes.
Augustine put his faith on the line before these Christians and accepted the Blessing with Mrs. Kang. Now, they must be mocking him, to see him so wronged by the woman and movement that he pledged himself to. How deeply embarrassing it must be to True Father to see this exemplary Christian who had put his faith in him be made a mockery by his youngest son. It is a black mark on Rev. Moon’s effort to unite Christianity, a goal which St. Augustine still shares.
I believe this too will pass because True Parents’ foundation is settled for all time. Despite this aberration, the noble efforts of countless Unificationists who are faithful to True Parents and strive to live a Principled life will keep hope alive for unification and the realization of God’s Ideal.♦
Dr. A. Wilson (UTS  Professor of Scriptural Studies). He edited World Scripture: A Comparative Anthology of Sacred Texts and World Scripture and the Teachings of Sun Myung Moon.
2 comments: