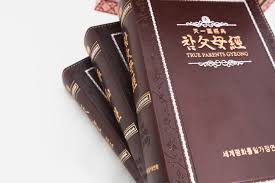 Father said in 2004, "Any person, a third person, regardless of how great they may be, even if they have several Nobel prizes under their belt, nobody can touch (or change) the Cheon Seong Gyeong. That's why new denominations will not arise." (The Selected Speeches of Rev. Sun Myung Moon, Vol. 447-83, 4.30. 2004)

But since the mistakes and misquotes in that edition were actually going to lead exactly towards divisions, Father gave instructions about correcting CSG as soon as possible. Only then, he said, the book will be sealed.

"The first and second sorting process have been conducted. It consists of around 2,300 pages. Look at the huge amount of pages. No one among you is capable of conducting the task of reducing it. I will work on reducing it myself, complete it before I die and mark it with a seal" (vol. 434-128, Jan 30, 2004).


Why Father requested to correct CSG

We cannot avoid to see "the Cheon Seong Gyeong, as well as the eight textbooks as a whole, as only a half-finished concept and not a work that could stand the test of time," Dr. Wilson wrote.

The first Cheon Seong Gyeong is full of duplications, being an amalgam of 16 booklets developed in Japan with overlapping content. It does not include any material from speeches beyond March 2003, leaving out the entire last decade of Rev. Moon’s teachings.

The three Cheon Il Guk Scriptures taken together include much of Rev. Moon’s eight textbooks. Totaling over 4,800 pages, they contain far more extracts from Rev. Moon’s speeches than the first Cheon Seong Gyeong. As Father said himself:

Father said his words should not be changed, yet the book should be simplified and edited before his ascension, if possible. He said more volumes should be added - from his 1200 books, cause humanity needs the chance to study them all. He gave many comments on what should be changed and added additional explanations to be included; Repetitions and misquotes fixed. 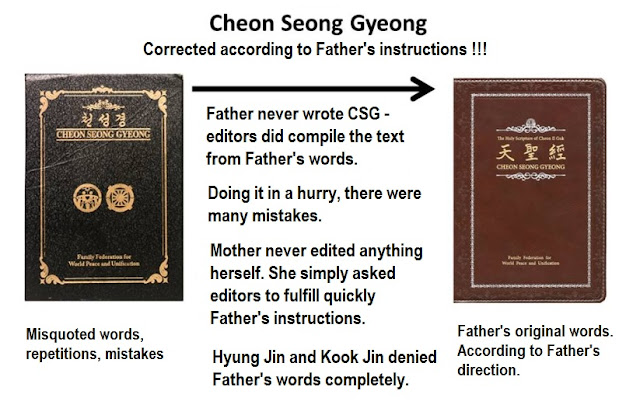 True Parents are the Word in Substance

Let's not forget, that True Parents are the word in substance, which is even more important and precious than any book. Without the substantial incarnation of God's word in a True Family, all books are just an empty slogan with no foundation.

Even in his last public speech, just before his passing, Father told us, that Mother is the victorious model we should follow in building God's Ideal. And we see that mother completely followed Father's directions in revising CSG.

1. Father said, 2nd and 3rd volumes of CSG should be published. He spoke how important is this

2. Reduction project of the first CSG started by Father's direction in his lifetime. Even if Hyung Jin's rebellion caused some particular changes, he has to blame only himself, not Mother.

True Father also mentioned the reduction project of the previous edition of Cheon Seong Gyeong, emphasizing the necessity of a new compilation project in the following manner: “The first and second sorting process have been conducted. It consists of around 2,300 pages. Look at the huge amount of pages. No one among you is capable of conducting the task of reducing it. I will work on reducing it myself, complete it before I die and mark it with a seal” (vol. 434-128, Jan 30, 2004).

Father also talked about the supplementation project of Cheon Seong Gyeong, “It is certain that you are following the path of love’s responsibility which I taught you based on Cheon Seong Gyeong; however, if there is anything that is left out from it, you must supplement it all in order to educate inadequate man. If you do so, there won’t be any problems.” (582-287, Dec 12, 2007)

Yang and Yin Versions of CSG
We love Cheong Seong Gyeong' 1 and 2; they are like Yang and Yin, like Male and Female aspects of the same book. Where Father's words changed? Not! It's still Father's words. And to be correct, Father has over 500 volumes, that CSG was systematized from; Not by Father, but by UC theologians.
I LOVE THAT - having one more improved version gives us the chance to study deeper (one - original - historic; and one fixed - with no mistakes, for witnessing). We can study both and compare. How wonderful! It will only help us learn better TF's word.
The New CSG only makes the Original More Precious
Let's be clear, THE ORIGINAL CSG will be always the original one. The fixed version will never change that. You want or don't want, future generations will study the original. This change will make it even more precious and historic. They will study specifically all differences.

On the other side, the new version of CSG was in process of preparation during Father's life. Mother has no much to do with that. But if she did, that's great. Think how precious is that for the future generations, to have Mother's touch and words. Think of all religions. The central figures and historic conditions gave different aspects to the different religions. We are not narrow-minded; Mother is the center and that has to give historic impression on how our Movement develops.