Sanctuary Church held a SATANIC CEREMONY where Hyung Jin separated from the lineage of his parents and reverted back to the lineage of Satan. Seems like his father and mother are now St. Augustine and his wife, Mrs. Kang. The bizarre thing is, they don't seem to realize what they are actually doing. See, Mrs. Kang: The New Clown 'mother'

But let's recognize that their actions are systematic. A year before this act, in a Sanctuary Church lecture was explained that Hyung Jin is a reversed version of Moses. If Moses brought God's people out of the Satanic palace, now Hyung Jin will bring out God's children, from True Parent's Palace back to the Satanic world. It sounded funny to me. What, they openly say Father's palace is 'satanic place' where Hyung Jin spent his early 40 years.

Cutting off from TP's Lineage

"There will never be another set of True Parents." TF 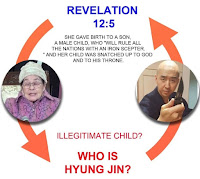 The false wedding with Mrs. Kang, held by Sanctuary Church was nothing but a Satanic Ceremony of cutting off from TP's lineage and engrafting back into the fallen lineage of Mrs. Kang. Thus, Hyung Jin is loosing completely his credibility and authority as TP's son. Much less to be their representative or hair. Read, HYUNG'S FALSE CLAIMS OF SUCCESSION

While we work to restore nations, in Sanctuary Church they are busy proclaiming Mrs. Kang as their new mother, without even divorcing her from St. Augustine. As we all know, divorce is against Father's concepts. He writes in his autobiography:

TF: "I was pushed into a divorce against my own principles."

Yet, Sanctuary Church ceremony was a grotesque mixture of a court case, divorce, and wedding at the same time. Lady Kang was declared true mother and married to Father in the spiritual world, while simultaneously divorcing him. Such an insanity is a clear sign of spiritual possession. Read, Mrs. Kang

We see Hyung Jin violating his promise and going directly against Father's instructions:

"If I deny True Parents you must not follow me" Hyungjin

This proclamation is recorded on video. It was done under the strict request of True Father after Father instructed Hyung Jin personally for 8 hours that "after his passing Mother will be the center" and "he or his siblings should never proclaim themselves as a "new center", even if TPs make mistakes.

Father's last public proclamation shows how false are all accusations of Sanctuary Church against Mother. Instead, Father requested on life and death to unite with Mother, because she is the victorious model:

“Under True Mother as the victorious representative of the world’s women, women can establish now the model.." Father 's last Proclamation - July 16, 2012

If we read Father's last public speech, just before his passing, we can understand Father's unity with Mother; proclaiming that they are the victorious True Parents; and Mother is "the victorious representative of the world’s women," "the model of a true mother and true wife."

"I sincerely ask you to choose True Mother's path; the path of a true wife, of a true daughter and of a true woman leader who will build a unified world where freedom, peace and happiness." Father - July 16, 2012


Father said, with Mother, they lived united "throughout their lives," "based on true love.. learned from Heaven" and his last order was to "devote ourselves completely.. under the guidance of True Parents, who are carrying out the providence on earth as the substantial selves of God, the King of peace.”

We see clearly that in 2008 up till his passing, 2012, Father was clear about central position of Mother. The real conflict with her was that Hyung Jin did not want to be obedient and needed a way to go against Father's commands and teachings, because they restricted his selfish desires.

"The responsible person of UC is not Hyung Jin nor Kook Jin. On the top of Hyung Jin there is Mother.. Do not forget this." (TF 2011)Hyung Jin's False Claims of Succession Kook Jin false Sanctuary Churche false

"God commands.. through TPs, not directly from God to TC. All children and the rest of the world must follow in the way of True Parents. There is no other way."

Yes, this was proclaimed by Father long ago, she is in special position of "recognition by God," Father says, and "she had fulfilled her responsibility."

"True Mother won a supreme victory over the highest level of Satan's world. She entered into this position based upon the recognition by God, Satan and all people that she had fulfilled her responsibility as the True Mother. Starting with Christianity, she has gone beyond the realm of religion and has achieved victory. She can therefore occupy and act from the precious position of Eve whose mistake in front of Adam has been restored. I will proclaim this to heaven and earth. Therefore, I will publicly recognize Mother's achievement at the "Ceremony for Proclaiming and Celebrating True Parents' Cosmic Victory." From now on, Mother stands in a position equal to my own. The age of the equality of man and woman has come. It is the age of the equality of man and woman based on love. Now is the time when we have to unite women and teach men about this." (302-232, 1999/06/14)

Based on that Father made ceremony to proclaim that "From now on, Mother stands in a position equal to" his. He continues,

"I held a public ceremony to recognize True Mother's achievement. She is worthy of recognition by both the Unification Church and the Creator. You have to say, "There is our Mother! She is the same as Father!" I have been the right side of God, but now I have set up Mother as the left side of God. Therefore, we can enter the era of liberation."


"Even when I am alone, I represent True Parents. And the same goes for Mother. When she is alone, she represents True Parents." CBG


"We did not know her. Only when True Father departed did we realize True Mother’s power. With a creative, strategic focus never before seen, the Only Begotten Daughter is carrying forth the mission of the Holy Spirit—national restoration, seven nations by 2020... They complete each other. If we don’t know her, we never really knew him." True Parent's Way
3 comments: