My Dream with Mother and Hyung Jin


MY DREAM
with Mother and Hyung Jin

Recently I spent a night in the spirit world, observing the spiritual realm around Hyung Jin and that around True Mother. The realm of Hyung Jin and Kook Jin was dark; People were afraid of each other, gathering only in groups united to accuse and persecute others.

Big contrast with the spiritual realm around True Mother. So much trust, love and mutual support was there. But everyone was focused and working hard for the restoration of their tribe. The spirits were constantly coming and reporting how many other ancestors they have restored.

It was clear, Hyung Jin was standing as a King for restoring the Middle Spirit world, while Mother was leading the restoration of our ancestors in the Paradise. I noticed that from Mother's realm people were observing Hyungjin's realm with great anticipation.

In Hyungjin's realm, however, people were busy with kind of self-centered activities, to just keep them excited. Their level was still not enough matured, to be able to live for others and for the providence. That was the only way to keep them believing. And of course, in those realms Witnessing will be a very difficult endeavor.

My Gift to See Spiritually

I don't usually dream random dreams. Instead, I have many experiences when I will spend the whole night in the spirit world. When alive True Father was often taking me with him and educating my spirit the whole night. Father or Mother's spirit appeared from time to time in my prayers and gave me guidance.

Sometimes, if I asked God about different problems He would allow me to visit the connected realms in the spirit world, so that I can observe and understand how these people relate and live. That made me ask Him many questions; Why they do such evil things? How did they become like that? Then He was teaching me different ways, until I could understand.

But until I could find solutions and way to liberate that, my heart was not at ease. I was crying for God's painful situation, "Heavenly Father, if I can't help you at least I will sit here and cry for you and for these people in Hell."

The Realm of Hyung Jin and Kook Jin

So this time I appeared in some gloomy place in the spirit world. My heart intuitively felt that Hyung Jin and Kook Jin are in that spiritual realm, so I went searching for them. Because of my heartistic connection to them, it was easier to orient and find where they live.

The place looked like a small stadium, yet outside was protected like a castle. This was needed, because in this realm people easily accused each other of anything, so they were isolated there for their protection.

Truly the atmosphere inside felt way safer and brighter for this realm. Hyung Jin and Kook Jin were sitting at the center of the stadium, lovingly observing the activities. Many members were around enjoying different pastimes. Of course, they didn't do anything providential, but even the self-centered activities they did, like dancing, games, etc. were great lip upwards for this dark, hopeless levels of the spirit world.

I greeted Hyung Jin and Kook Jin. They stood up and warmly greeted me. After spending some time with them I felt the danger of recognizing and accusing me, so I headed off to get out of this realm. This task proved to be more difficult than finding them.

The Escape from the Middle Spirit Realms

Probably the most correct way to position their spiritual realm is some Ham level of the Middle Spirit World. You know Ham was the one judging and accusing based on his self-centered sense of righteousness. Ham was the one who did not repent but felt excused to judge his Parent and multiply gossips, stirring the same displeased feelings in his brother's hearts.

But now, trying to find my way out of this realm I started realizing what is the problem here. People were afraid to come out on the streets. Citizens of this realm were 'good', self-righteous people. Yet, they were so eager to judge and persecute if something was not in accordance with their external way of judging, so normal life was impossible. They misunderstood God's heart. Imagine if God, who sees every small mistake we do in hidden, start judging us and not forgiving us. Such a hellish world have they created for themselves.

Streets were nearly empty. I stumbled on a group accusing relentlessly a lonely girl, so I interfered and helped her. In return, she agreed to help me find my way. While talking to her we climb up on a train. I didn't know the customs in this realm so just followed her. For me everything was interesting, and the information was so much. I wondered why the train was so empty and soon we had to run for our lives, because the mad conductor started chasing us. We forgot to get tickets. Gosh, these people never give up. Read Gossiping Realm in the Spirit World

I soon learned that in this realm no one will forgive you. If in their view you make the smallest mistake, they will chase you to the end. That was the very thing that gave meaning to their lives - to accuse, to judge, to create unity to accuse and attack others. Only based on that common base they could feel friendship. I was happy when After many incidents in this spiritual lands I finally got out.

The Realm of Trusting and Serving to Each Other

I realized that the place I came was much brighter. But soon I was to be surprised by the relationships in this realm. They fixed things for me and I expected they will charge me a lot. When I was a bit late I expected to be accused, scolded or murmured about it. Instead, they gave me presents and had such a nice, understanding and loving attitude. 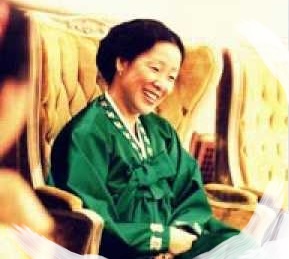 I was surprised by all that and asked God, "What is this realm? Why are people so good here?" The answer came in the most beautiful and unexpected way. I lifted my head and saw True Mother coming towards me.

My heart got overwhelmed with joy. I felt like with my personal mother, so pure, strong heartistic connection. As a new guy in this realm probably I reacted too naturally, intimately, without barriers. But Mother also hugged me. See: We Love True Mother

Then Mother took me to the place where our members were working. It was like a big gathering place, much as places we hold our events on the earth. There were many big reception tables and lines of ancestors were coming towards each one of them. So I was curious about what are they doing. Mother said, "Go and see", so I went.

I saw ancestors of wonderful members, that I know on earth. Actually, they were all reporting, at those tables, how many other ancestors they have witnessed today and how many will come for education. It was such an exciting atmosphere, like we have on earth when holding big mobilizations around Father.

Oh, this realm was so much more alive. We were sitting on a table around Mother and sharing heartisticly. I'm sure in my curiosity and ignorance I embarrassed Mother with my questions and attitude, but she never showed it. Surely she is aware of my level. We have so many things yet to learn, to know how to relate with True Parents in the spirit world.

At the end, Mother took me outside and showed me a place where members could observe and pray for the realm of Hyung Jin and Kook Jin. That was the very reason why those around Hyung Jin in the Middle Spirit World could feel joy and hope, unavailable for those dark realms. Pity, in their immaturity they cannot understand and appreciate that. Just the opposite, they mobilize even more evil spirits to want to destroy Mother.

On the other side, in Mother's realm, everyone was happy with even the smallest improvement in the state of the people in Hyung Jin's realm. God's heart is always love, but love that helps other's grow. Please remember, we should always keep grateful and loving hearts.

Seeing the spiritual reality behind, we cannot judge, but pray and feel compassion for those who suffer in lower realms. The higher spirit world constantly helps, heals and gives love - again and again; without judging - unconditionally. But in Hyung Jin's darker realms, fear of conspiracy, judging and gossiping, mistrust and accusations were just normal.

We can't blame them. That's the spiritual surrounding. The very negative energy there overtakes one's mind and makes him think and see everything in this way. That's why they have to build walls of protection, learn fighting and be skeptical of everything. One cannot escape but have this spiritual reality express in his physical life. People on earth are not aware of how much they are influenced by the spirit world.


"In the spirit world.. you can discern if a person is below.. or in a higher place than you... you can immediately see their rank in the hierarchy of love. This rank is absolute... Those who succeed in earthly life by slandering and plotting against others will be turned upside down in the spirit world." CSG1 p.849

In higher spiritual realms, where Mother is connected, there is only love and LFSO, so no such things are needed. After the coming of CIG this spiritual reality of the people is becoming more and more expressed in their physical life. Members who didn't liberate all their ancestors can easily become subjugated by the low reality of their suffering ancestors in lower realms. Members who don't do witnessing and Tribal restoration, may also easily sink into negative mindset and resentment. In the new world of CIG, the old mindset is painful, because the Universe cannot leave such things to continue existing. Let's all Liberate quickly God's Heart. Aju!

WHAT FATHER SAYS ABOUT MOTHER
(1) God’s only begotten son and daughter are the first couple in His love.
(2) Father, as an individual cannot enter Heaven. He needs only begotten daughter.
(3) If there is no only begotten couple (TP) heaven is vacant
(4) If TM didn't fulfill her mission, no clan, no lineage, no TC will appear
(5) TM is born of pure lineage, Father didn't have to, he inherited Jesus' foundation