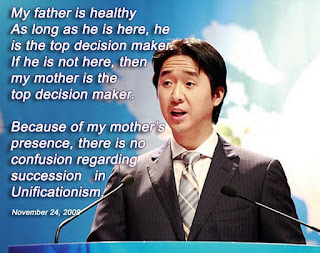 Hyungjin and Sanctuary Church exhibit deep lack of Principle understanding. Naturally that leads to many false interpretations and wrong actions.

Their own explanations reveals best their deviation from the Truth. They depict TP's palace as Egipt, Satan's realm, which Hyungjin now has to liberate them from.

Everyone in UC should keep absolute faith in True Parents. Any denial of True Parents' victory is from Satan. Hyungjin and his clique show obvious love for gossiping, hate-talk, negativity and resentment and even dirty manipulative techniques; using power, collect accusations, stir fear, doubts and faithlessness.. to bring members on Satan's side.

Hyungjin presents himself as Moses on Satan's side

In a Video lecture Sanctuary Church compares the life of Hyungjin with True Parents, as Moses' 40 yrs in the Pharaoh's palace. But here is the irony. Moses came out of the Satanic Palace.  The Israelites departed from Egypt under Moses’ leadership. Hyungjin came out of God's Palace and misled members to depart from God's realm, back to the Satanic realm, under his leadership.

There's an even greater irony than that, because 40 years includes all the time that Hyung Jin lived with True Father still alive. Therefore, is he condemning TF as equivalent of Pharaoh, the Satanic leader? Even if he is not aware of doing that, that's what evil spirit world is doing through him.

KOH is like a human body. The body follows the commands through the nervous system.

"The Kingdom of Heaven resembles a person.. the mind’s command is transmitted to the whole body through the central nervous system, causing the body to act with one purpose. Likewise, in the Kingdom of Heaven, God’s direction will be conveyed to all His children through the True Parents of humankind, guiding everyone to live as one." DP 46


HJN denies True Parents --> Equals: The nervous system takes control over the body and leads them constantly against God and True Parent's will. This is exactly the way Satan controlled humanity through the body... through evil plotting... gossiping and accusations.

This is the reason, we find so little of True Parent's tradition in Hyunjin's teachings and actions. At the same time Hyungjin's talk and practices resemble completely the methods how Satan teased and manipulated people in the spiritual and the physical world. We witness his trapped emotions, gossips, spiritual deviations.

Hyungjin's work is dividing. Essence of his teaching is Resentment (recreating his trapped emotions in others) - therefore, Multiplication of Evil, spreading Gossips - the Four Fallen Natures:

Observing Sanctuary Church we can see why it is so difficult for evil spirits in Hell to accept True Parents and see hope. They are so obsessed with negativity and don't wont' to let it go. Let's compare that with the standard and heart of True Love, so well expressed in the words of Sun Jin Nim:


“If you are practicing true love, it should not be in a spirit of competition; rather it should be with a heart that hopes and acts so that all can be brought to heavenly completion. True happiness is not when you win and someone else is at a loss. In True Parent’s heart, we all must win and achieve victory as one family under Heavenly Parent. Can you imagine an environment that practiced this level of true love; this is Cheon Il Guk." Sun Jin Nim


Our Responsibility in this Age

"Of the descendants of Abraham (TP) who entered the land of Canaan (CIG)," DP explains, those "who transgressed against God (lost faith in TP), perished because they lost their qualification as God’s chosen people. Only the two tribes of the southern kingdom of Judah, who continued to uphold the Will of God, remained the chosen people".

What is most essential in this providential stage, is to preserve our firm faith in True Parents.

Yet, Father subjugated Lucifer and now all of us need to learn to subjugate the evil Angels and their lies and trickery. Providence allows us to be attacked and tempted with any satanic trick to make us loose faith in True Parents, but we have to withstand even Satan's most powerful weapons; gossiping, negativity, evil manipulation. Satan may try everything to make us loose faith. If we withstand he is powerless.

The best inspiration today is that Mother keeps the core believes and tradition of True Father's teachings, with an amazing, beautiful heart. Meanwhile, Hyungjin has abandoned Unificationism absolutely, and denied TF's words completely, since True Father's Seong Hwa. In this age we should learn to overcome these Fallen Natures and follow completely our Original Mind and Heart.

"The original mind is the parent among parents because it represents the God of the universe. It is also the teacher among teachers.. Furthermore, the mind is better able to guide its servants in the right direction than any owner in the world". RSMM page 848 Cheong Seong Gyeong


In the age after the coming of CIG, millions of people discover, that it is so easy to talk to our inner self and get the answer of any question. Our subconscious knows exactly the cause of any sickness, bad relationships and so on. Even if the origin is hundreds of generations back. Having this ability I soon discovered, that in this state we can never accuse others, because we can see the cause of their behavior. We are interconnected, to hold resentments is simply unthinkable and self destructive. In this state of mind we can truly talk about Revolution of Conscience and Revolution of Heart. The actual realization of CIG is only a matter of quickly helping the rest of humanity to reach to that state.

True Parents have already given us the Truth, it is our responsibility to live in True Love, inherit their model and reach perfection. Let's support True Mother and bring joy and liberation for God and our beloved True Parents, by building substantially CIG.

MUST READ: My Reflection why SC is wrong!
Our youth should be educated about True Parents' life.. and the providential development based on proclamations... Read...