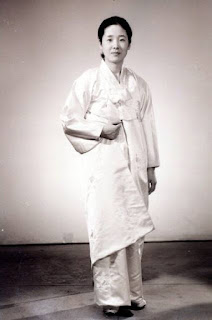 There are 57 quotes about True Mather in the original CSG. Saying that Mother change it, Hyungjin is ready to deny all of them. He denies Father's words, yet he claims to be their keeper.

"You have been born through True Mother. Remember that the favor bestowed by the True Parents is a great blessing that cannot be exchanged for anything in the whole universe."

WHAT FATHER SAYS ABOUT MOTHER
(1) God’s only begotten son and daughter are the first couple in His love.
(2) TF, as individual cannot enter Heaven - needs only begotten daughter
(3) If there is no only begotten couple (TP) heaven is vacant
(4) If TM didn't fulfill her mission, no clan, no lineage, no TC will appear
(5) TM is born of pure lineage, Father didn't have to, he inherited Jesus' foundation

"There is no way to enter heaven for those born without receiving the lineage of the True Parents – the True Father and True Mother." CSG1 p.

"True Father and True Mother are True Teachers by virtue of their true love. They have taught something this world does not know" CSG1 p. 227

"You have been born through three providential mothers – Eve, Mary and True Mother." CSG1 p.

True Mother is the first, chosen representative of God's love

"You need to remember that the favor bestowed by the True Parents is a great blessing that cannot be expressed in words alone. It cannot be exchanged for anything in the whole universe." CSG1 p. 1436

God's will unfulfilled without True Mother

"As the bridegroom, Jesus could not perfect God’s family without establishing his bride as the true mother. Without Jesus’ family being established, the will of God would remain unfulfilled. (Blessed Family - 488)  Without a God-centered family first being established, neither the nation nor the world could be restored." CSG1 p. 515

"People in the world who were born before the True Mother came into existence were born in vain." CSG1 p. 1271

Woman is an incarnation of the True Mother

Pray in the name of True Parents

"At the end of the forty-year course, we were able to achieve, along with the liberation of women through the appearance of the True Mother.. standing on the global level.. The True Mother has accomplished a victorious foundation, thereby liberating women from the position of fallen Eve who could not fulfill her responsibility. ". CSG p. 1387

"We cannot welcome the day of the victory of True Parents without first establishing an absolute standard of not succumbing to any historical sorrow, pain or resentment." CSG1 p. 215

True Mother satisfies this criterion.. She had no elder brother or father. There were just the two of them, mother and daughter. Her mother was a representative figure among Koreans when it came to offering devotions for the Second Coming of the Lord.  1181

True Children (as Archangel) connect us to True Mother, she to Father

".. individuals and families representing Cain and Abel must unite centering absolutely on the True Parents, first becoming as one with True Mother." 1575

Eternal tradition - no need of Revolution

Since the Fall was brought about through the misuse of love, restoration should be brought about in connection with the love of the new parents, centering on God. That is why.. I officiate together with True Mother.. The tradition set up in this way will become the eternal tradition. There will be no need for a revolution. 1248

"True Mother embarked on.. speaking tour... opening the doors wide for the passage of the dignitaries .. On that basis we can enter into the era of family right of kingship within Your victorious domain."

"We are truly grateful for Your great work in collaboration with True Mother in preparing such a foundation for us."  1577

"The path that True Mother walks should absolutely not be as difficult as mine... there should be no women who oppose True Mother in her course. We need women to be the bridge for the sake of liberation, for the course of the mother; for this they must be able to offer support and totally sacrifice themselves... liberate heaven and earth, and liberate God."   2015

"Who will be the first ones to attend True Mother and True Father in this historical era, by making 360 houses in your Home Church area?"  2033

You must become one with True Mother

"Accompany True Mother, return to our hometowns and kindle a fire in the hearts of ten million people."  2102


Conclusion: Our Attitude of Love
We have to be sure. TF allowed that. Father warned HJN these feelings of historic resentment will come on him. In DP Father coded the fact, that HJN will possibly divide the Church, if he repeats the fall of Solomon, deviate from our core teachings. Father even asked him to proclaim, that he, or any other of TC will never go against True Parents, even if they can't understand, even if they see mistakes. But despite all these warnings, it is so difficult to feel and think normally, under the pressure of all this historic resentment. So it is not HJN to blame. We need to correct, explain and help him, overcome that. There are evil spiritual powers behind that. We need to pray and make conditions, but never send hate.