There is no New True Parent, no New King and no New Center 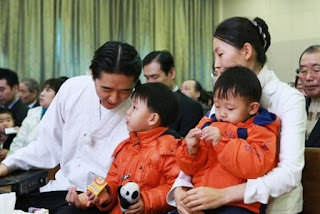 TP are the CENTER

"Through the proclamation of True Parents? All the good spirits in the spirit world that have served God and all the evil spirits centered on Satan will be sharply divided. When you are centered on True Parents, you stand." TF - CSG1


In a video recording Hyung Jin admits Father specifically asked him to proclaim that he will never put himself a "new center" and never "deny True Parents", no matter if they make mistake or hurt him.


"Can you face the challenge of Satanic people.. defending the realm of True Parents.. I'm willing to die for Heavenly Father and True Parents more than a billion times over if that enables True Parents' victory to remain here on earth forever. Because of this attitude, everything which True Children are doing on earth will remain inviolable. What we are doing will bee passed on from generation to generation." Victory of Love, p. 258

Even after appointing Hyung Jin, Father was still clear, "The responsible person of UC is not Hyung Jin.. On the top of Hyung Jin there is Mother." TF, 2011. True Parents are the eternal center and the eternal standard:

"Who are the True Parents?.. True Parents are the parents who have realized the ideal of oneness centering on God’s love. They have fulfilled their responsibility after passing through the realm of dominion based on accomplishments through the Principle.. into the realm of direct dominion... the parents who for the first time in history established the ideal of oneness based on the love between God and man. God’s ideal of love has finally begun to settle on earth through the family of the True Parents." Father, CSG

Even from the spirit world we have testimonies about True Parents' victory:


"We pray for our True Parents. They have demonstrated that God's true love can dwell within man forever." Victory of Love, p. 260

In this age of Women, we see the beauty of women's heart expressed in TM, Sun Jin Nim and the wives of the first 2 sons - giving birth to the New Culture of Heart (raising in the East). In opposition we see H1, H2 and KJN, restoring the aggressive male nature (repeating the failures of the West - Read, Sanctuary Church Influenced by Implanted Manipulators Aiming to Destroy TP) And we are not surprised; This final challenge of the restoration process comes in due time. Read, Why we are in the Period of Divided Kingdom. Open your senses and feel the universal energy caring this change, but don't be disoriented, keep hold on True Love.


"There is so much potential in where humanity is going now. But now we are crossing the bridge. And on this bridge there is confusion. It's transition, it's not the end. These are only signs of the historic shift."  Spiritual Prophecy

Do not despair at the things you see, it's the new energy changing the world for good. But everyone at Sanctuary are being told to carry knives and survival equipment, to prepare for the tribulations. In his deviation, Hyung Jin lost faith in TP, lost faith in CIG, lost faith in Father's words and is being influenced by the End Timers who believe this is last days. But we don't need to be full of paranoia and fearful.


"If we believe that we are powerless victims, things will seem to happen to us and we will see ourselves as victim. If we understand that we are one with the universe, we can be powerful creators. It's all in our judgments." Quantum Studies

There are plenty of signs that we are in the Age after the COMING OF HEAVEN, were good and evil are being divided; evil is becoming more obvious, revealed and desperate, while the new world of goodness is raising fast. Let's be clear, it's coming because of the unified positive energy and love of millions of people. Millions of members work tirelessly and pray for that. Millions of other bright groups are guided by Heaven in the same direction.


“If we unite our forces together, then we can make a better world, a world of peace."   MODEL FOR THE IDEAL PEACEFUL WORLD

For me it's so easy to see who is leading the providence, even from simple mathematics. Hyung Jin is preoccupied to claim succession, same like H1 did. But just compare their witnessing results with those of TF. In his first 10 years of mission Father expanded to 30 churches all over Korea, in 10 more, he expanded missionaries around the world. I don't think H1 and H2 can ever dream of such results. And surely it's Satan's power behind their attacks on TP:


"Satan fears the words True Parents.. because when people believe and follow these words, everything Satan has will be destroyed and brought to ruin. These are words he intensely fears. Satan always tries to block the way of the True Parents and longs to see their corruption and downfall."  Father, CSG

Yet, if you look at today's providence in the FF, you see thousands of couples blessed each day around the world. Providence now is moving so fast in some providential nations. And I see that expanding to more and more other nations. Of course, negative people don't see that. They are too preoccupied with their selfish complains. But I see it. I feel the new spirit overwhelming the earth. I see the bright future coming. And I'm a realist, I know growth takes time and efforts. I just don't see H1 and H2 investing in that direction. Yet, I have the optimistic hope that someday they will. Their spirit will awake and they will unite with Mother. It's all in God's hands in this Age. Read, THE MODEL FOR THE IDEAL PEACEFUL WORLD

And we should always remember, the real fight is between our mind &body, and in our families. Not outside! Here is Sun Jin Nim sharing of what it is to be close to True Mother and our responsibility of walking TP's path:


“It is being in the presence of the most pure, loving and compassionate being in the world—so untainted by everything, so strongly connected with Heavenly Parent’s life.. Once you start perfecting the way, of walking True Parents’ path, all these difficulties start to fall away."  SUN JIN NIM


"We sincerely hope and desire that.. we can return glory to our Heavenly Father and True Parents and bring joy to them as well."  2009, Yeon Ah Nim
"God and True Parents blessed us with the blessed life and through this life they wish for us to inherit the true love of God, to become greater blessings to our spouse, our children, our families, our cities, our neighborhoods, our nations, to the world and to God."  2009, Hyung Jin