How Wonderful If Father Married only True Mother 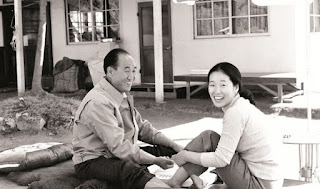 How Wonderful If Father Married only True Mother

I love what Mother said to the leaders: “Father was not to marry any other woman before meeting me," Remember the heartbreaking course True Father endured because of his first wife turning against the providence.

Father himself said this about his 1st wife, "convinced she was right she became the ancestor of opposition to the Unification Church.. In order to ruin Teacher she sold her house that she had bought with hard-earned money and hired detectives.. To oppose the Unification Church she sacrificed her entire possessions." How pity H2 does the same.

Knowing DP we understand Satan will do anything to block God's providence. He tried to block the restoration of true wife, he is now attacking the true children. But what happened when Satan took Jesus' life? God could save the people. Sacrificing TC God will claim the whole of humanity. How wonderful!

Wouldn't it be great if Father could marry directly True Mother. No one can deny that! I don't know if providentially could be possible, but Father was supposed to have only one True Wife.


In December 30, 2016 with 200 wives of Blessing between 1960 and 1968 Mother said: "Father, who was born with original sin, could have that original sin removed as a result of meeting me, the only begotten daughter born into this world without original sin. Father was not supposed to marry any other woman before meeting me." (SC translation)

This is also based completely on Father's own words and explanations. SC should know these facts before criticizing.

So about the issue, whether TF was born with or without original sin; I don't claim we understand that, but why argue with Father.  Father said, "Mother is of pure lineage"... "unrelated to the fall." TF also said in 2004,

If we read carefully Father's words, we understand, that Mother was born without original sin, while Father didn't have to be born this way. Father could inherit Jesus's victorious foundation, but Mother had no one to inherit from - she was the first (Only-Begotten). CSG: 57 quotes about True Mother

All Mother says is based on Father's words. Most FFWPU leaders and members understand this, but Sanctuary prefer to accuse. Well that's their level of heart. Later on, when it becomes clear that Father said this, they don't apologize, but continue criticizing, just twisting their rationalizations. If one loves to accuse always will find reasons to do it. That's how they end up as evil spirits in the spirit world, unable to ever stop doing such evil and harm others.

After years of denial finally Sanctuary Church officially admitted that Mother is the Only Begotten Daughter, yet they never apologized for their rumors, accusations and negative talk but continued to attack other words of Father

Father said, "The Completed Testament refer to.. the fulfillment of God's covenant to establish the ideal.. Adam and Eve.. to be God's children and complete the ideal of creation.. (and) return as the son and daughter of daughter on God's side.. who can finally represent God's kingship on the world level. On this foundation, we will be able to return to a world that has nothing to do with the Fall." (CIG p. 126)

So was Father to achieve that with one woman, or with 3 women? Of course, one woman. But because Christianity failed, that was not possible. We know the Principle. Jesus was not to marry before having foundation on which Satan will not be able to accuse. But could Father know these things at the time. Spiritually he was taking off from the place Jesus left things. Jesus, had no foundation of protection but desperately tried to have wife and fulfill God's will. In a way, Father accepted parents matching, to restore that Jesus was not matched.

Principle also says, that in case of failure, the Third Adam will have 3 attempts and will suicide only on the 3rd one. We all realize, this is in case of failure. Despite the Fact that this is failure of the Christianity, Principle of Indemnity states that Father has to take full responsibility for that and restore it, which he did.

We can only listen to TPs and try to understand. Only God can have complete knowledge about such issues. As Father said it:


SANCTUARY CHURCH AGAINST THE PRINCIPLE


"All people, created with the same external form as God, become one person resembling Him.. they are all in a sense one person. Each of you is like a cell that makes up a part of God." CSG p. 704

Seems like Sanctuary Church members never read TF's words and never studied DP. They jump to attack, "FFed are believing that TM is God, as she proclaimed herself now." So what's wrong, Father was teaching the same all the time; The Messiah (TP=TF+TM) are the ones who became one with God. God expresses through them. The Principle is clear, TF alone is only half - incomplete, cannot even stand in front of God alone.

Read in Cheong Seong Gyong, the Chapter "True Parents are the incarnation of God":


"When Adam and Eve reach maturity as God’s physical body, God can dwell in their hearts and rule the physical and spirit worlds through them. This is how God’s Kingdom is established." CSG p. 934

Father clearly said, God can freely come and express through TF, as well as through TM. And that's the beauty; through them now, both - spirit world and the physical world are being united. Thus God can have authority over the two worlds, so CIG started.

Remember, that before his ascension Father said that he was the god of night and Mother was god of day. Why SC constantly argue with Father's explanations, trying to alter their meaning? They can accuse forever Mother, but in fact, these are Father's explanations. If they were sincere, they will acknowledge that and apologize.

Another point Sanctuary Church do not understand from DP; Perfection needs lifetime... not possible in spirit world. How unprinciple; SC believe TF became evil spirit, who wants to divorce and marry unperfect woman in the spirit world. Really! SC does not know, that DIVORCE is not acceptable. Even if partner goes to hell, husband has to go there and save her.

People with developed hearts and conscience understand that, but if people have evil heart and just want to gossip and accuse explanations won't help. You see, that's the real problem; the hearts of Hyung Jin and those who follow him. These are people who enjoy accusing and nothing can stop them from twisting facts and truth, just to accuse and ridicule others. That's where the real problem lies - in their hearts.

True Mothers's victory is unique. No woman can compare with her in her unity such a difficult husband. As Hyung Jin himself said in 2011,


"If we compare with True Mother, we are not doing very much. We are doing nothing.. so we must truly repent... Please become people who can send good energy; laughter, joy to True Parents." Hyung Jin

At that time Hyung Jin understood the greatness of Mother in attending such Father. What irony, that now he turned upside down, from the most faithful, became resentful and himself is sending the most painful energy towards our beloved TP. Will history forgive him that?


"At the point where the evidently divided internal God and external God are perfectly reunited, Sun  Myung Moon and Hak Ja Moon, who were able to become True Parents in the Garden of Eden with no shadow of the Fall". TF

Father on many occasions said his 3rd and final wedding of the perfection stage level would take place on Foundation day. That day would be the beginning of the Kingdom of heaven on earth. Why? Because Father (in Heaven) and Mother (on Earth) will represent the unity of the Cosmos (sp.w. and ph.w.). But that's where Hyung Jin lost faith, unable to accept that Father and Mother are one, centered on them both worlds are already one. Thus God is the center of both words through them. This is the real meaning of the Foundation Day and it's truly the cosmic wedding, Father was talking about.

No Confusion about Succession


Hyung Jin wrongly thought at this point he should be the center, even though Father clearly told him this is not so; 'Mother is the center, after his passing'. Because of that there should be no confusion about succession, Father explained.

"The responsible person of UC is not Hyung Jin nor Kook Jin. On the top of Hyung Jin there is Mother.. Do not forget this."  (TF 2011)

"Hyung Jin should not proclaim himself a new center" - Father's direction


"Every morning I pray for unity within the True Family. I pray that Mother is in constant communication with Father, and in my prayer I wish for and yearn in sincerity that the Children can become united with Mother...  I love you Mother so much, and from deep down in my heart I want to thank you for all that you have sacrificed throughout your life. Brings tears to my eyes when ever I think of what you had to endure in your life." John H.