Father explained: “You have to understand the scary time has come when Heaven directly removes those who go against God's will. Every time I see the leaders of our movement, I ask myself who will remain among them.” November 29, 2010 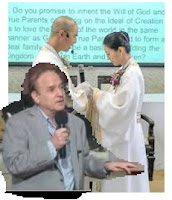 How would you explain Rev Eu or some other leader who was very close to TF who follow SC?

See spiritually and you'll understand: Those who reach to the top of the Growth Stage and are to pass into the Completion Stage of growth, need to undergo resentment, where Satan's feelings and logic will try to subjugate them. If they succeed, gladly enduring, they victoriously subjugate Satan, thus qualifying to enter God's realm of dominion. If they fail, they become resentful, critical, disappointed... objects to the control of the evil spirits; which will express in their way of rationalizing and in their actions. As you see in Sanctuary Church.

It is truly shocking to see how many members had a relationship with True Father, but not True Mother! Yet, DP is clear; The same holds true for all fallen people, (and even those born of the pure lineage) they can become the ideal people God has foreordained them to be only when they complete their own responsibility. (Which in this age of attendance is to attend the (perfected Messiah, that is the perfected image of God, male and female.)

"In 1993 in Seattle Father said, "many of you are physically close to me and can touch Father, but are you spiritually close to me". And he went on to explain the difference, asking which is more important, being physically or spiritually close. He said, "because if you are heartistically close to me then you are protected from Satan accusations and attacks"... prayer life is one of the keys in humbling our hearts also being like a child and believing and following your parent direction always". - Connie

Dr. Panzer's video - full of such childish, even ridiculous twisted reasoning that only the physical mind can produce.

In his video response to Dr. Hendricks, Dr. Panzer explains that True Mother doesn't like Hyung Jin Nim's haircut, whereas True Father is okay with it. Really? Facts say the opposite! Sanctuary Church claims this as evidence of Mother's disunity with Father and which makes her unqualified as the True Mother of Mankind recognized by God. You see how babyish and external is their logic. Worse, they don't rely on facts, but are ready to make up any rational to criticize and spit on Mother.

Here is the truth; I heard Father ask Hyung Jin Nim, "When are you going to grow your hair back!?" - indicating that Father in fact was not "okay" with Hyung Jin Nim's haircut." Thus, Mother is the one united with Father, Hyung Jin was not. But that's such a low, immature level of arguing such external things and use them to devise accusations, judgments, negativity, doubts, disrespect, division; All treats of immaturity and lack of spiritual growth.

But why good educators like Dr Panzer didn't grow? Why they became so vicious in their use of manipulation, negativity and gossiping? Was it a long process, or they were suddenly taken by Satan? Were intrigues and gossiping part of their own childhood?

Let me point just few such manipulations Sanctuary Church uses. They take Father's words and reverse the meaning upside down; For example, Father said, "the successor" should be "recognized by all" and you'll know who he is, because all UC and the TFamily will approve and support him. Hyung Jin definitely is not that 'successor'. But look at Richard Panzer's video, Sanctuary Church changed the words, to sound like everyone must "accept" him, no matter what. Some form of dictatorship! Very unprincipled statement. Even Father was obligated to follow the Principle. He said many times, if he does not follow the Principle, we should not follow him. But Sanctuary Church believe we should follow Hyung Jin despite of his unheavenly words and actions.

Twisting the actual meaning of words and events

In fact, if you check carefully, all of the Sanctuary Churche's rationalizations and claims are based on clever twist of the actual meaning of words and events. Read, HYUNGJIN'S EVIL PROPAGANDA: HOW LOW A SON CAN GET

Sanctuary Church falsely claims that Father anointed Hyung Jin as successor; that Hyung Jin is the "eternal command center".  But the text they wave around says the opposite. "God and True Parents are the eternal command center," it says. It does not say that Hyung Jin is the 'successor', but he has to 'inherit' True Parents standard and by Hyung Jin's family overcoming resentment, for they will be, Father said, taken by the resentment of 3 ages. In his prayer Father even suggested they may move to Satan's side. But we should not worry, Father continues, because eventually Hyung Jin will be back, because this is the age of God's dominion.

If Father ever anointed Hyung Jin to be above Mother, why the next year, 2011, Father proclaimed that Mother is the Center? Father said, "The responsible person of UC is not Hyung Jin nor Kook Jin. On the top of Hyung Jin there is Mother.. Do not forget this." If Father wanted to put Hyung Jin as successor, why he clearly instructed him never to proclaim himself 'a new center'.

Sanctuary Church says that Father divorced with Mother in his last public speech. But this speech says just the opposite; 'Follow Mother, don't follow male struggles (Hyung Jin, Kook Jin and Hyun Jin). They say this speech confirms Mother failed, but actually it says, "Mother was victorious... she is the model... it is a life and death matter to follow her." (See the Video)

Of course, Hyung Jin's trapped emotions led him to such a resentment, that he denied the very essence of Father's work, teachings and victory. For us it's clear, without True Mother there is no True Parents. Without True Parents, there is no Salvation. Read, True Parents are GOD'S SUBSTANTIAL IMAGE

We should also understand that there was a group in our movement already working actively to destroy TP.

And Father warned us, to be ware of manipulators implanted in our Church with evil intend. In his resentment Hyung Jin became their pray. They surrounded him and Kook Jin, aiming to accomplish their vicious aims through TPs sons.

This reflects the group of evil spirits that I see working through them. They misled him further and further in his fantasies of glory and power. But don't you see, this only leads to something positive. The evil is being relieved and separated from our church. The position of TP is being affirmed more and more theologically and otherwise, so that it can stay unshakable for all the future generations.

Same like the secular humanists redefined the term 'family', now Sanctuary Church is doing everything to redefine the term, "True Parents". Whatever speech you open, from TF, you always read about True Parents; "Salvation is through True Parents", "Sharing our lives with True Parents", "have faith in True Parents", "become people who can obey the True Parents." Unable to unite with Mother, Hyung Jin had unresolved feelings in his heart that led him to rebel against her. Luck of unity automatically gives a base for Satan to invade. Read, Hyung Jin TOOK LUCIFER'S NATURE to RESTORE IT

TF clearly warned Hyung Jin not to proclaim himself a New Center and deny TPs... If he was a true filial son, he will sacrifice his life to support and protect Mother, thus protecting Father's legacy, fulfilling his responsibility 'to become hair' and overcoming Lucifer's rebellious nature.

In his videos Hyung Jin teaches that Father's tradition of tithing is wrong and 'satanic'; Father's followers are "bozos" (meaning: "stupid and insignificant"). That shows how highly he estimates Father's achievements, putting them bellow zero point.

If you translate the actual meaning of Hyung Jin's description, you'll see how horrible, ugly, scary picture he makes of Father. It means that Father failed to restore wife, so he culd not establish True Parents. Read how Hyung Jin was teaching against Father's directions even when Father was still alive and how he neglects and reverses Father's clear directions to make his FALSE CLAIMS of SUCCESSION

Sanctuary Church are in clear denial of basic Divine Principle and Father's explanation. Read of the meaning of God's Day, Father's words about True Mother's victory. True Parent's entered the Direct Dominion of God, which happens after the 3 stages of growth and then "Return to One Body With God" in the 4th stage. "One Body With God" is return to the Origin Stage and is the meaning of iLshim + iLshin = iLChai, which Father explained on May 1, 1998 at the 44th Anniversary of HSA-UWC that we could forget everything else, even Divine Principle, but to never forget this.